How Useful Are Caliber Conversions in Firearms?

This article was published in Shooting Illustrated February 23, 2022

One gun, many calibers. Sounds like a worthy goal, right? Even in America, where the total number of firearms owned by one person isn’t limited other than by budget, being able to switch calibers for training or for ammunition availability can be quite helpful. Caliber conversions done right are great. What does it take? 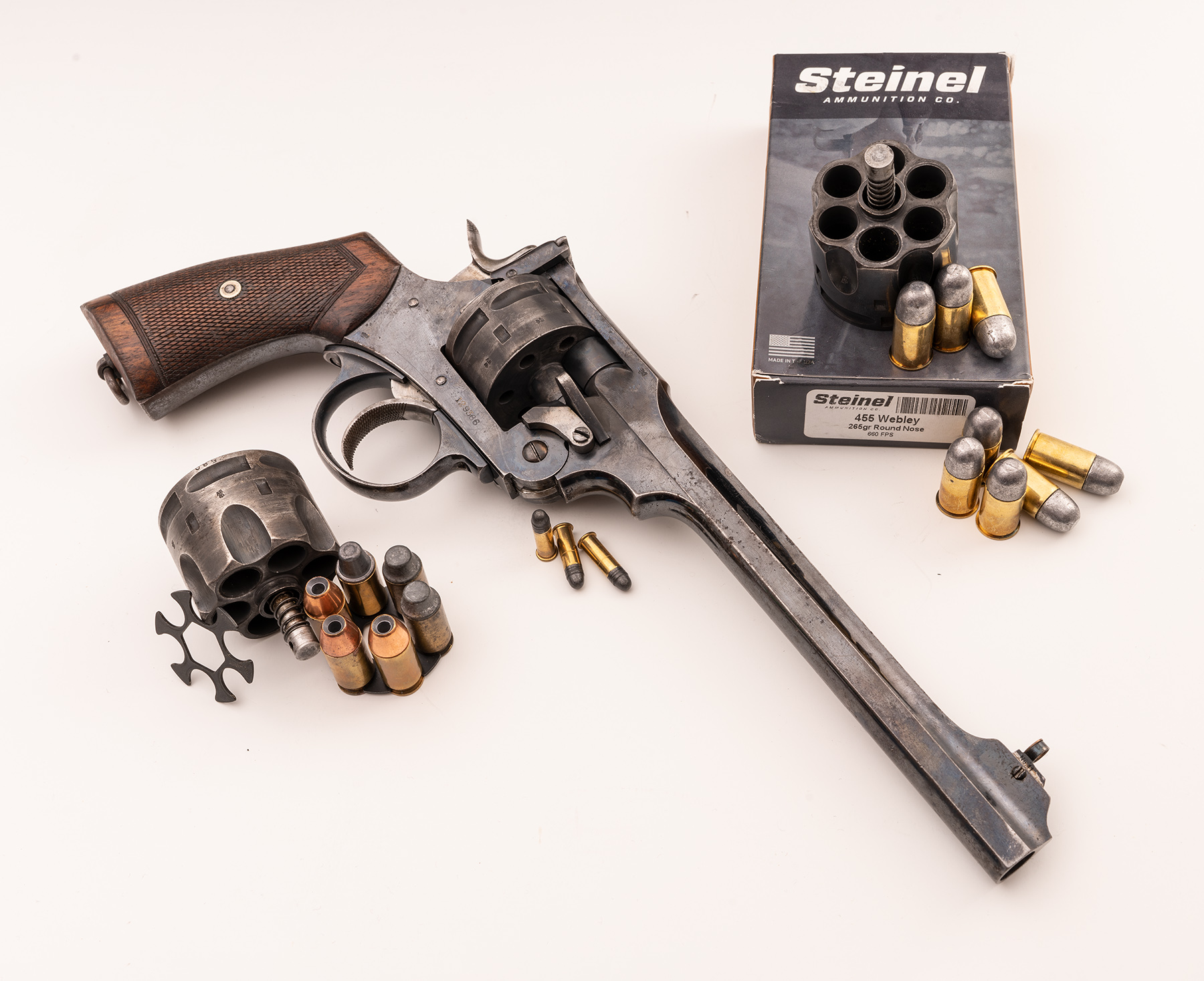 The author found the Webley Target model with conversion cylinders to be an interesting exercise on the range.

The Target model Webley .455 revolver arrived at the time when original .455 Webley ammunition was not readily available, so having both .45 ACP and .22 LR cylinders made it shootable. Unfortunately, “shootable” does not always mean “useful”. The .45 ACP conversion proved inaccurate, with bullets being quite undersized at .452 inch the pistol shot in the general direction of the target but not anything resembling a group. Beyond 7 yards, hitting a full-size silhouette was more a matter of chance than skill. Additionally, ensuring that all .45 ACP handloads were weak enough for the century-plus-old action was also a task, since full-strength cartridges could easily get mixed up with the reduced-power loads necessary. Hollow-base bullets would have worked better, but none of the ammunition available to me at the time used those.

The .22 rimfire cylinder with a 7-inch rifled insert worked much better. Although it gave excellent accuracy, the point of impact was at least two feet (!) below the point-of-aim at 12 yards. Raising the globe front sight to the top rather than the middle of the rear notch and aiming at the top of the target ensured a hit somewhere on the steel, but precise target shooting was hardly possible. Using a two-handed hold on the gun was also a perilous proposition, as the short cylinder moved the forcing cone far enough back to endanger the thumb of the support hand. One careless thumb placement, and the cylinder gap blast hammered the fingernail with a hot, fast puff of carbon. Finding new manufacture .455 Webley ammunition solved the problem: at 15 yards, all shots made with Steinel duplicates of the original load impacted almost touching. 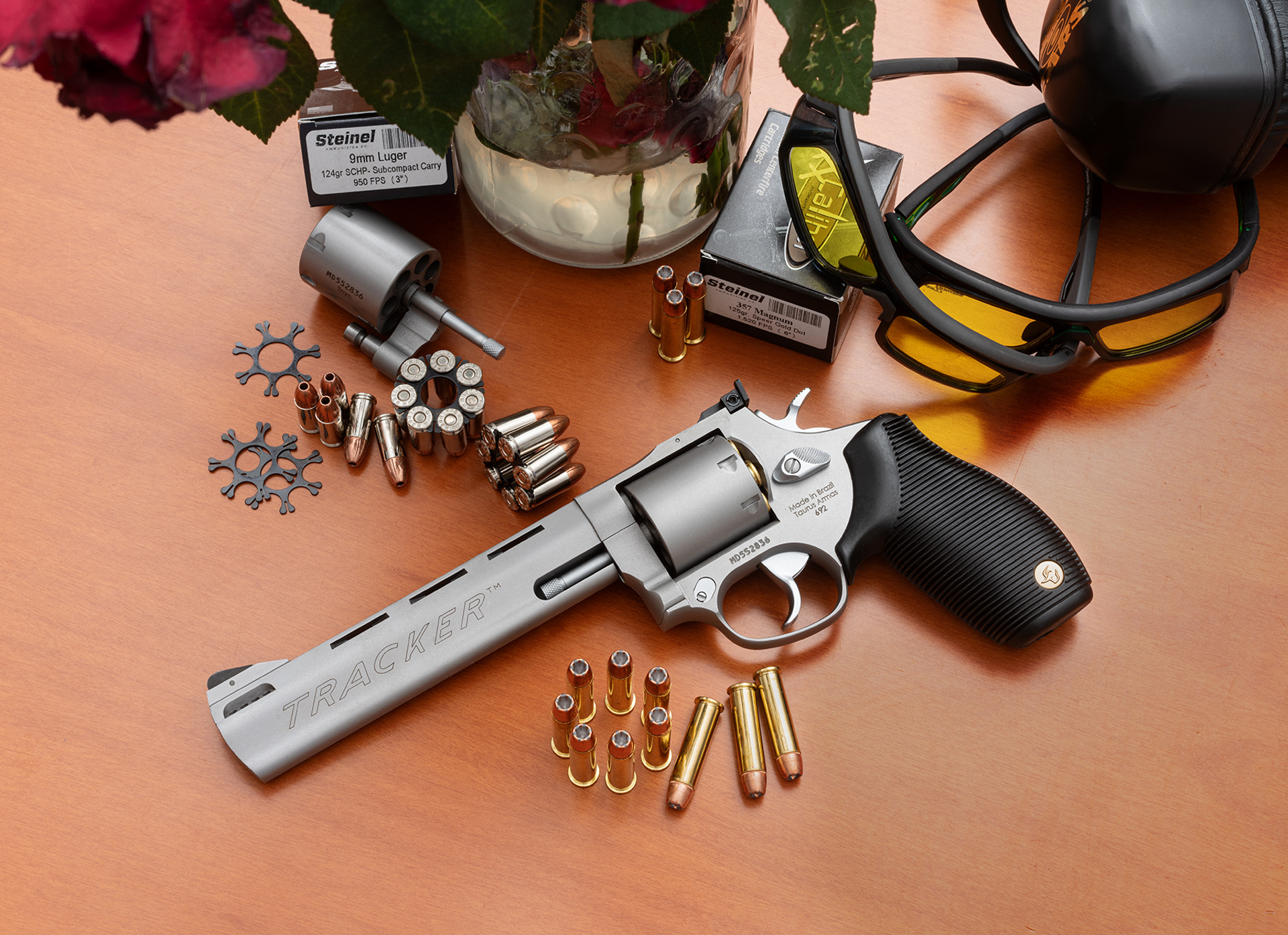 The Taurus Model 692, capable of .38 Special, .357 Magnum and 9 mm showed excellent accuracy with all three calibers.

Taurus‘ Model 692 proved a significantly more successful effort in the same direction. Supplied with quick-change .357 Magnum and 9 mm cylinders, it shot close to the same point of aim vertically and identically for windage. Lowest was .38 Special, then 9 mm, then the .357 Magnum. Overall difference between the extreme loads did not exceed 3 inches at 15 yards, and accuracy was good. With .355- to .356-inch 9 mm bullets being fractionally undersized for the bore, I expected them to spread wider, but in actual use both calibers proved equally accurate. With the ammunition shortages of late, having three calibers available in one gun proved most useful! 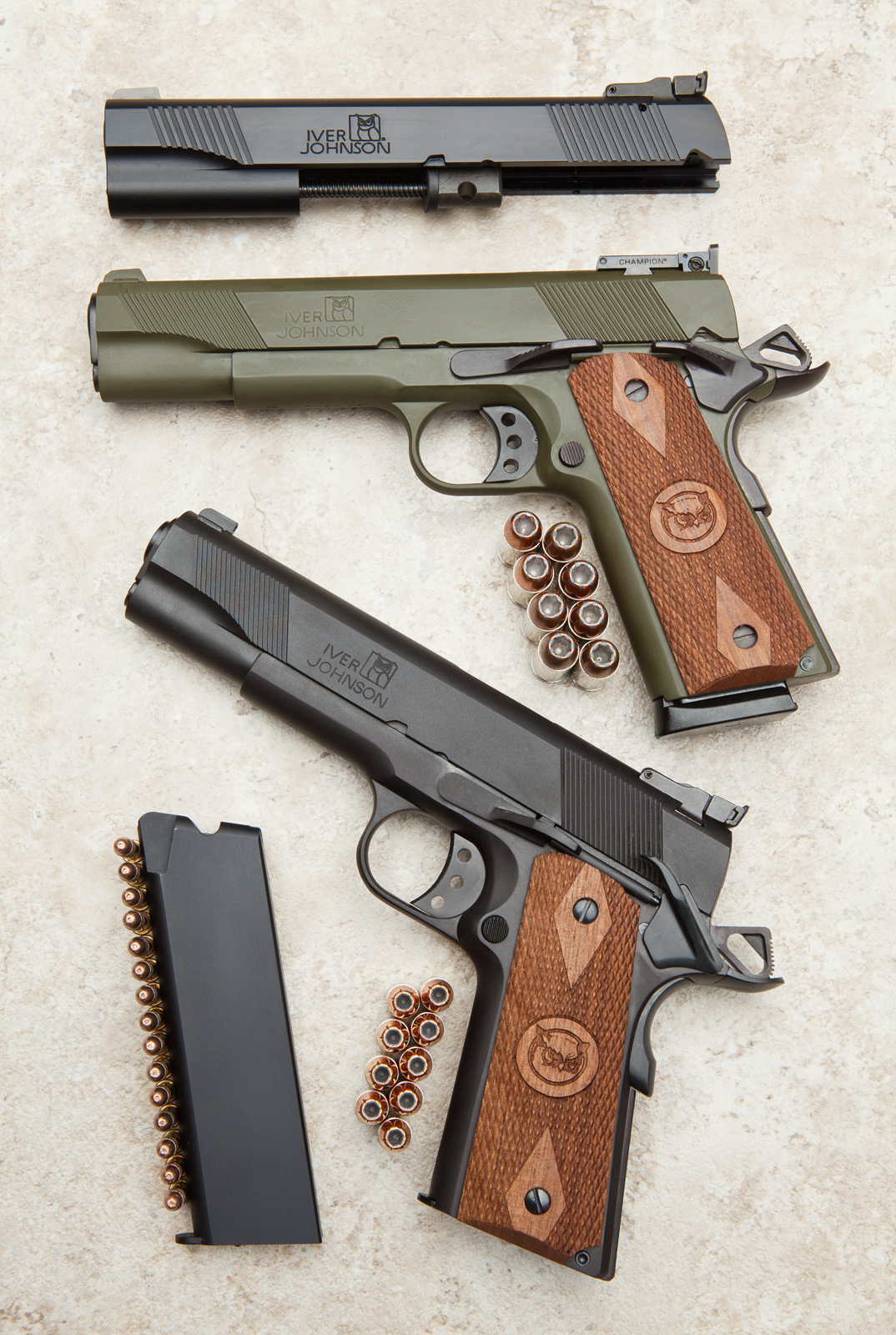 Iver Johnson’s conversion for the 1911 allows more time on the range for less money.

Firing .45 ACP , even from a full-size revolver, can get a bit tiring after a full day of training. More importantly, my budget is more accepting of a brick of .22 LR than it is of a case of .45 burned up in a single range outing. The Iver Johnson M1911 conversion slide proved accurate and reliable with negligible recoil. With its own sights regulated for the weaker cartridge, it avoided the point of impact mismatch that plagued the Webley. As a result, I probably fired 20 rounds of rimfire to every .45 ACP round that went through the centerfire upper. Swapping them is quick and easy, and both fit the same holsters. The same is true for Twisted Industries conversions for Keltec P11 and PF9, and Ruger LC9 pistols. Lightweight centerfire carry pistols are efficient but can be a handful to manage on recoil. Conversion slides with rimfire barrels and dedicated magazines make practice, mainly sighting and trigger control, cheaper and easier on the shooters’ hands. 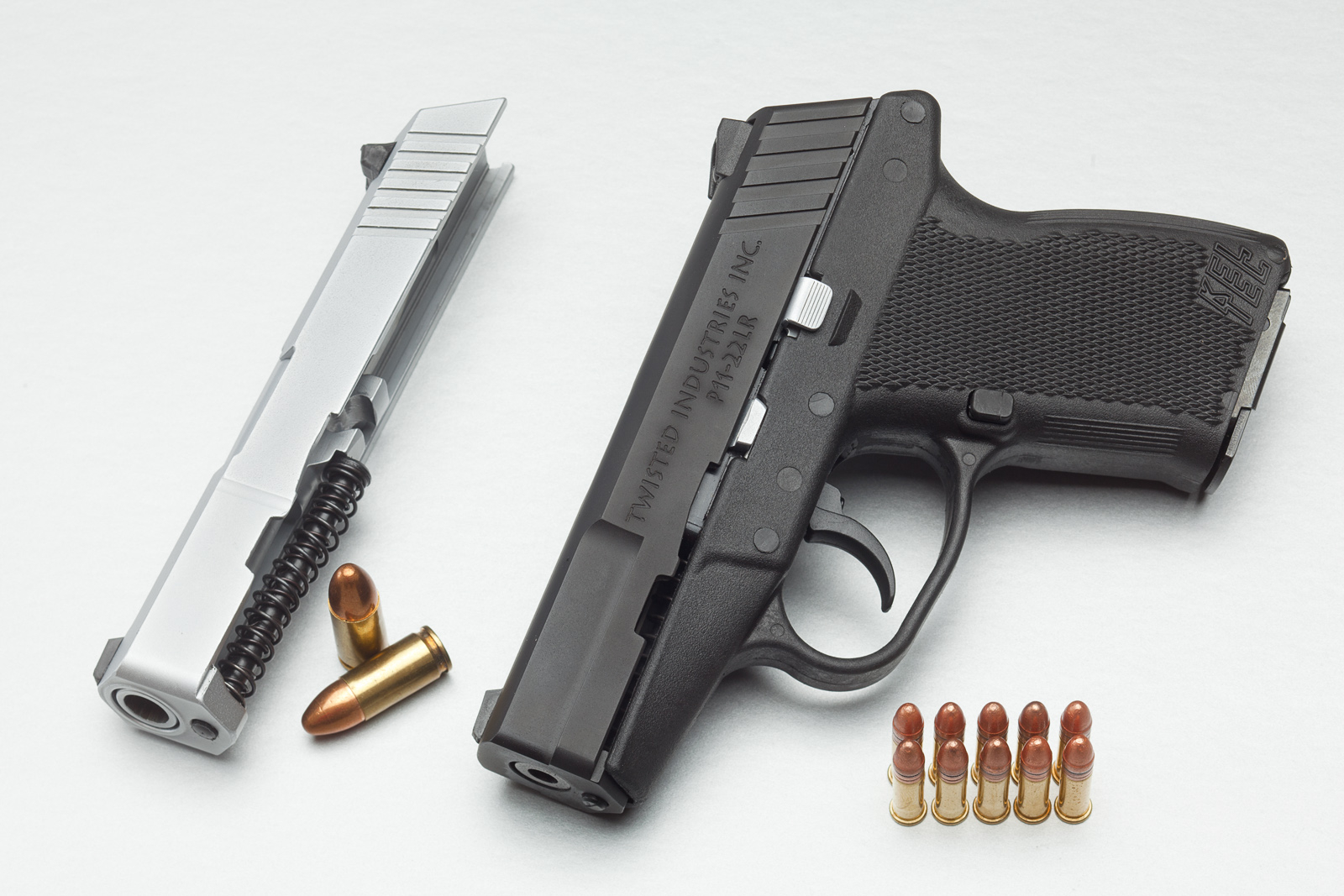 Shooting a micro 9 mm with .22 LR allows for more familiarity with a carry gun at a lower cost.

Another option is something like the Armscor 22TCM/9 mm tactical combo, one of the most interesting multi-combinations. On the one hand, you have a proven combat cartridge, on the other a 2,100 fps screamer that exceeds .22 WMR rifle velocity with the same exact bullet. Loud and flashy, 22TCM causes minimal felt recoil. It has half the drop of 9 mm at 100 yards, dropping only 6 inches, with a mid-trajectory height of 1.6 inches. The 40-grain JHP adopted from .22 Magnum retains sufficient velocity for expansion out to 125 yards, making it a good small game cartridge. Up close, 9 mm seems more terminally effective. With both barrels using the same sights, elevation should be regulated for the preferred load. The point of impact differs by two inches at 10 yards, and diverges more further out. The same magazines work perfectly for both loads. 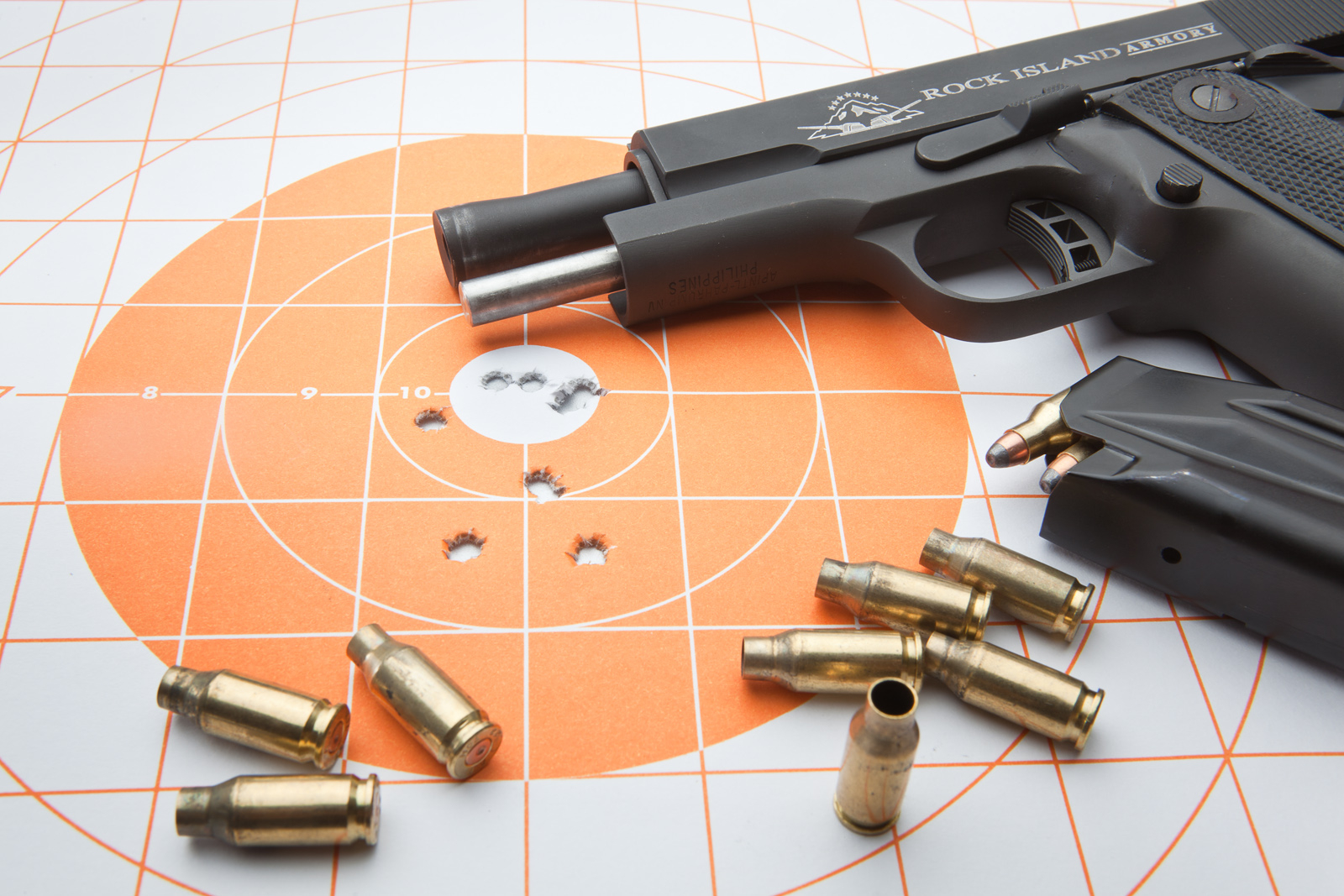 Caliber conversions have come a long way since the .45-70 Gov’t inserts used for naval cannon or the single buckshot pellets driven through adapters in army rifles with just the percussion cap pressure. The most versatile examples either match the ballistics of available calibers closely or provide dedicated sighting solutions. In all cases, you can practice more, with less recoil or with more common ammunition, and gain more familiarity with your firearm, always a good thing.